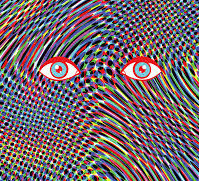 From the Internet web site of Soren Dreier and thanks to the tip from Jay.

"DARPA Wants to Remove Hallucinatory 'Side Effects' from Psychedelic Medicines"

"A newly announced research program from DARPA is looking to remove those pesky hallucinatory side effects from novel psychedelic medicines such as MDMA and psilocybin. The program is currently calling out for research proposals investigating innovative drug treatments targeting post-traumatic stress disorder [PTSD] and depression that can be administered without the 'unpredictable consequences' of current psychedelic medicines."

Drugs as used to treat depression and PTSD in soldiers? That is what this is about?

A hidden agenda does exist here? I am thinking what is euphemistically referred to as the INTERROGATION PROBLEM! [often called MK ULTRA by conspiracy theorists]

That INTERROGATION PROBLEM consisting of: 1. How to get a person while captive to talk when they do not want to talk. 2. How to know the captive is telling the truth when talking.

Decades ago psychedelic drugs such as LSD tested on unwitting subjects and found to be unreliable and unpredictable.

This "research study" has a two-fold purpose? One-above board, overt with good intentions and the other not spoken about in polite company?

Slip me a tab dude! Did you know you're melting?