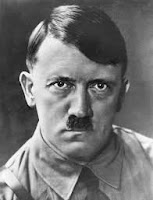 Begins here a series of headlines and extracts from the Sunday edition of the Chicago Tribune newspaper. In commemoration of what is perhaps that most infamous day in all of recorded human history, 1 September 1939 and the start of the Second Word War [WW2].

As reported by the Chicago Daily Tribune as it was known at the time.

"BERLIN, Sept 1 (Friday) (A.P.) - - Adolf Hitler today ordered the German army to meet force with force. His order of the day to the army read:

"The Polish state has rejected my efforts to establish neighborly relations and instead has appealed to weapons. German in Poland are victims of a bloody terror, driven from house and home. A series of border violations unbearable for a great power show that the Poles no longer are willing to respect the German border."

"To put and end to these instance incitations, nothing remains but for me to meet force with force from now on. The German army will conduct a fight for honor and the right to the life of the resurrected German people with firm determination. I expect that every solider, mindful of the great traditions of the eternal German military, will do his duty to the last."

"Remember always that you are representative of the National Socialist great Germany. Long Live our people and our reich!"