Once more to the topic of sound nutrition as vital to the health of a nation and especially as producing a population of strong and able young men whose vitality as soldiers is greatly enhanced!

"The Unexpected History of Japanese Food in America, From Edo [Tokyo] Bay to the Bowery"
From the article by H.D. Miller

As was generally perceived the diet of the Japanese heavy in the consumption of fish and as being advantageous. The Japanese soldier from a nutritional aspect alone superior to his adversary, mind, body, spirit! So as was perceived! Especially so in the aftermath of the Japanese victory in the Russian-Japanese War of 1905.

"The full page headline in the St. Paul Globe, September 18, 1904 screamed 'Has A Fish Diet Made the Japanese Brave and Strong?' The victory of the Japanese over the Russians in Russo-Japanese War shocked the world and launched a fad for all things Japanese." 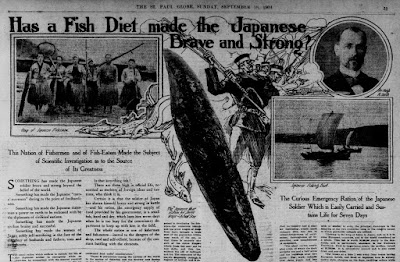 Those headlines from the St. Paul Globe [1904] as most pertinent.

* "Has a Fish Diet made the Japanese Brave and Strong?"

* "This Nation of Fishermen  and of Fish-Eaters Made the Subject of Scientific Investigation as to the Source of Its Greatness."

* "The Curious Emergency Ration of the Japanese Soldier Which is Easily Carried and Sustains Life for Seven Days."

See previous blog entries the topic of which was that military aspect of sound nutrition: