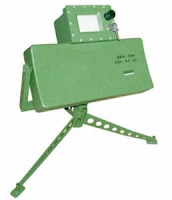 Never heard of this before. The anti-helicopter mine [AHM].

"In every war they invent a new way of killing you." - - Will Rogers.

"The Anti-Helicopter Mine AHM-200 is designed to destroy low flying helicopters within 100 m[eter] range. The mine is provided with a built-in unified fuse, which is activated by a combined acoustic & Doppler SHF sensor identifying the helicopter by the noise and Doppler signal. The mine cannot be activated by occasional noises, moving people, animals, ground military machines, etc."

"The control system of the fuse processes and analysis the signals from the sensors and activates the mine in case a helicopter enters in its combat range, or deactivates it on expiration of the preset operation time."

"The mine is positioned on a stand, which allows to aim the combined sensor to a defined direction."

Thanks to the tip from the excellent Internet web site isegoria.net.

This is an adaptation of the American claymore mine! Designed with low-flying helicopters in mind and not ground personnel. A directional and aimed spew of pellets from the AHM enough to "bring down" a chopper.

POTENTIAL LANDING ZONES DETERMINED BY THE DEFENDER IN ADVANCE, AHM IN PLACE, SELF-ACTIVATED AND DEADLY.