I am Generalinspekteur der panzertruppen and have approved this blog entry!

Elvira and her friends! And don't get on the wrong side of them!

I would have thought this sort of thing would be strictly an American innovation. The use of military service manuals as written and illustrated in a cartoon and almost comic book fashion.

But this is not so!

From that era of the Second World War [WW2] those German soldiers as detailed with the mission of operating in combat the brand-new Tiger tank as provided with a down-to-earth manual and operators guide done in that "comic book and cartoon fashion". Understand too A DOCUMENT EFFECTIVE!

"Tiger crewman went through many hours of both classroom and hands-on training at the panzer school located in Paderborn, Germany."

"a special training booklet for the Tiger students. This booklet was assigned the official publication number of D656/27 and given the name Tigerfibel, which means Tiger primer."

"a manual that would get the attention of the young men training on the Tiger. To do this he used humorous and risque cartoon illustrations along with slang the combat troops would identify with." 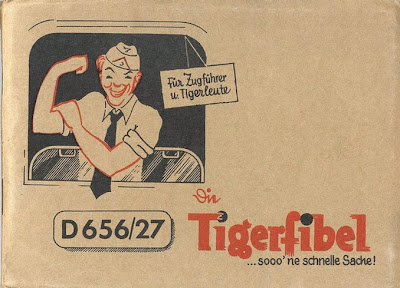 "The illustrations in the Tigerfibel . . . included allegorical sketches, technical drawings, photographs and cartoons. The cartoons often involved an attractive blonde woman named Elvira who frequently found herself without any clothes or in a romantic setting with cartoon Tiger crewman. The Tigerfibel also contained many short, memorable verses and limericks referred to as 'morals' or 'mottos. All of this was done to capture and hold the attention of the fledgling trainees."

Scroll to the bottom of the Tigerfibel web site and view the entire slide show for yourself. Well worth doing!