Here with descriptions of those American and Australian OTH radars with images showing coverage.

"The United States Air Force Rome Laboratory had the first complete success with their AN/FPS-118 OTH-B. A prototype with a 1 MW transmitter and a separate receiver was installed in Maine, offering coverage over a 60 degree arc between 900 and 3,300 km. A permanent transmitting facility was then built at Moscow AFS, a receiving facility at Columbia Falls AFS, and an operational center between them in Bangor, Maine."

Presumably this American Air Force OTH-B radar watches for enemy warplanes approaching from the oceanic regions and not over the North Pole from Russia.

"The United States Navy created their own system, the AN/TPS-71 ROTHR (Relocatable Over-the-Horizon Radar), which covers a 64 degree wedge-shaped area at ranges from 500 to 1,600 nautical miles (925 to 3,000 km) . . . The first production systems were installed in the test site in Virginia for acceptance testing, but were then transitioned to counter the illegal drug trade, covering Central America and the Caribbean." 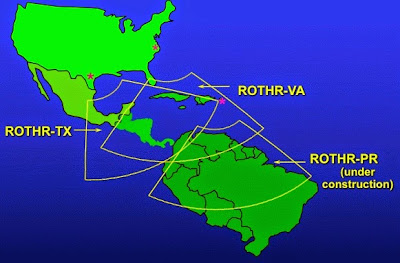 ROTHR. Monitoring that area of Central and South America for the presence of drug traffickers, ships at sea and low-flying aircraft both.

"the Jindalee Operational Radar Network developed by the Australian Department of Defence in 1998 and completed in 2000. It is operated by No. 1 Radar Surveillance Unit of the Royal Australian Air Force. Jindalee is a multistatic radar (multiple-receiver) system using OTH-B, allowing it to have both long range as well as anti-stealth capabilities." 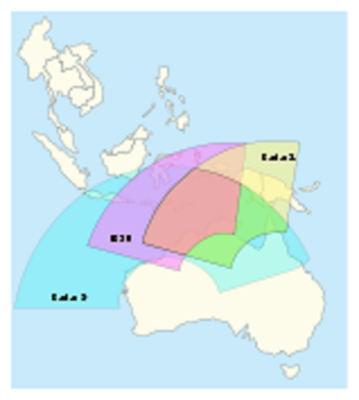 Please forgive me. This image greatly enlarged from the original so some labeling not legible. Also note that a portion of that coverage possibly is within range of where that Malyasian airliner was thought to have disappeared.  Jindalee apparently an improved and better version of OTH-B.

NONE of these OTH systems by reputation are used in a callous manner to create havoc and interference with the high-frequency radio bands as did the Russian Woodpecker?

At least I am not aware of any problems. Devoted readers tot he blog know better?