Read both Part 1 and Part 2 of the outstanding article by Jay Sharp "THE COMANCHE WAR TRAIL - AN AVENUE TO GLORY, A TUNNEL OF DEMONS". Thanks to Jay Sharp in all instances.

Of this I was vaguely familiar with and having visited Big Bend National Park only last week stood at the two points where the Comanche crossed over the Rio Grande, remnants of the thousand-mile long mile-wide trail no longer visible but perhaps only so from the air.

"The Comanches called September’s full moon, the annual signal for raiding, the 'Mexican Moon,' a season which brought opportunity and fueled spiritual renewal and material gain. The People preferred early fall to follow the Comanche War Trail to raid in Mexico and, often, western Texas, because the weather had cooled. The southwest wind had slackened. Game usually remained plentiful. Grazing remained nutritious. More of the Comanches’ horses, the plundered stock, and captives could survive the long, hard race home, northward up the trail." 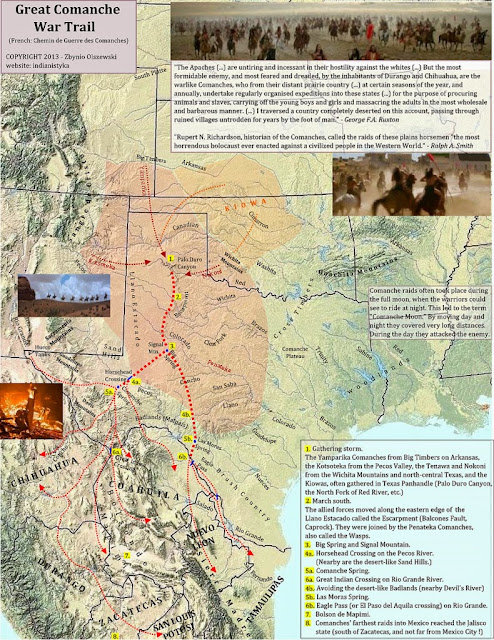 This map and the insets by Olszewski very well done. That area south of the Arkansas river in what is now Kansas USA and the panhandle areas of Texas and Oklahoma the homeland of the Comanche.

"The Comanche War Trail, 1000 miles in length, ran across the short grass prairie of the eastern High Plains Region, through the Monahans Sands, the basin and range country of Texas' Trans Pecos Region, and more than four hundred miles deep into northeastern Mexico's Chihuahuan Desert. The trail served as an avenue to glory, plunder and adventure for the Comanches . . . It became a tunnel of demons for the ranchos, haciendas, villages and towns of northeastern Mexico"

"Going away tonight,
Be gone a long time.
While I'm gone,
I'll be thinking of you."

Large war parties of Comanche very well organized and for THE BETTER PART OF TWO CENTURIES ON AN ANNUAL BASIS RAIDING THOSE SETTLEMENTS OF NORTHERN MEXICO ALMOST ALL THE WAY TO MEXICO CITY!

That capture of livestock and persons taken into slavery the goal. THIS ALSO BEING AN ASPECT OF AMERICAN INDIAN HISTORY THE AMERICAN INDIAN WOULD RATHER FORGET OR NOT WANT YOU TO KNOW ABOUT!

Comanche warriors [The People with a capital letter to distinguish themselves from all other tribes and nations] outstanding equestrians needing only a minimum of weapons, bow and arrow, club, tomahawk, a fourteen foot [four and one half meter] long lance and a few stolen or bartered firearms, able to live off the land, moving during periods of day and night with equal ease, experts at tracking, scouting and terrorism.

NOT necessarily the placid and peaceful hunter/gatherers living in total harmony with nature and one another.