The American general officer Winfield Scott somewhat overlooked by history but a combat commander in the same league as a Julius Caesar, a Napoleon, or even a Wellington?

That campaign [the march from Vera Cruz to Mexico City] of the Mexican-American War [1846-1848] resulting in a conclusion to the war favorable to the American side. A somewhat stalemated and inconclusive war brought a quick and dramatic end

Six battles fought and six won. All the while the American army fighting on enemy territory and doing so outnumbered.

"The Birth of American Operational Art: Winfield Scott’s Mexico City Campaign during the Mexican-American War of 1846-1848" by Kenneth A. Starskov 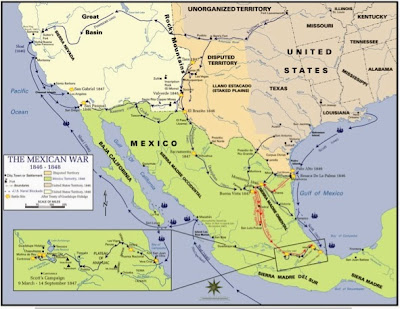 The Mexico City campaign shown by inset. NOT so visible. American naval forces able to project power during the war both in the Pacific and the Gulf of Mexico and do so basically uncontested..

"Scott was a well-read and experienced commander. His studies of military theorists such as Thucydides, Machiavelli, Napoleon, and Jomini"

Jomini in particular characterizing the campaign of Scott and his army as "brilliant".

Those victories of Scott and his army a combination of rapid movement, logistics obtained locally from a population treated with respect, in a benevolent and enlightened manner. Scott employing what might be termed in the modern context measured audacity.