Before there was Indiana Jones in the cinema there was Sir Hubert Wilkins in  real life!

Sir Hubert who organized and led the abortive under-the-water expedition to the North Pole a man who it seems was able to do it all. Even when not succeeding Sir Hubert always in the forefront and leading the way. 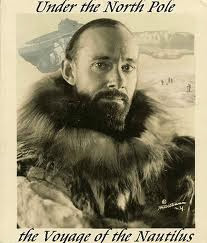 Sir Hubert also not one to shirk his military duty, twice decorated for battlefield heroism during the Great War [WW1]:

"In 1917, Wilkins [joined] the Australian Flying Corps in the rank of Second Lieutenant. Wilkins later transferred to the general list and in 1918 was appointed as an official war photographer. In June 1918 Wilkins was awarded the Military Cross for his efforts to rescue wounded soldiers during the Third Battle of Ypres. The following month Wilkins was promoted to Captain and became officer commanding No.3 (Photographic) Sub-section of the Australian war records unit. His work frequently led him into the thick of the fighting and during the Battle of the Hindenburg Line he assumed command of a group of American soldiers who had lost their officers in an earlier attack, directing them until support arrived. Wilkins was subsequently awarded a bar to his Military Cross."

And also during the Second World War [WW2] Wilkins volunteering his services:

"Wilkins next offered his service to the U.S. Army which retained him to teach Arctic survival skill to U.S. soldiers."

A man of patriotic fervor while of a rather advanced age [born 1888] willing and able to offer his services during a time of war AND GIVE A GOOD ACCOUNT OF HIMSELF! Most remarkable.

Subsequent to his death his ashes ceremoniously scattered at the North Pole during the voyage of the USS Skate [nuclear powered], the vessel having surfaced, breaking  through the ice to the surface in a manner as had been envisioned by Wilkins when planning the 1931 voyage of the Nautilus! 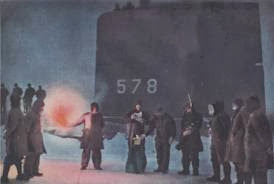 This torchlight ceremony showing the crew of the USS Skate scattering the ashes of Sir Hubert at the North Pole. The sail of the Skate [# 578] poking through the pack ice in the background.

"Wilkins died in the United States in 1958. The US Navy took his ashes to the North Pole aboard the submarine USS Skate on 17 March 1959. The Navy confirmed on 27 March that 'In a solemn memorial ceremony conducted by Skate shortly after surfacing, the ashes of Sir Hubert Wilkins were scattered at the North Pole in accordance with his last wishes.'"

They just don't make them like Sir Hubert anymore!