Thanks to Freeper, The Times of Israel and the wiki we have this item my initial response to which has been proven to be nearly 100 % wrong.

"Israel allegedly struck a military base in Syria [just the other day], reveal the presence of newly upgraded Russian anti-aircraft missiles . . . an upgraded and deployed battery of S-125 missiles and six very large trailers that could carry missiles." 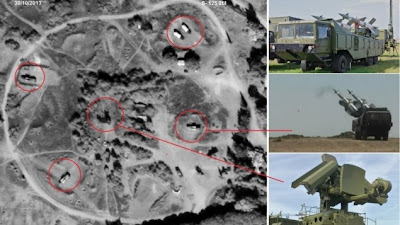 Original Israeli satellite photo of the SA-3 firing battery? Described as a S-125 2M and deployed vicinity of Latakia, Syria.

A system initially the development of which began [?] in 1961, deployment only a few years later, the SA-3 now according to my estimation five decades old, antiquated, the electronic-counter-measure solution for this missile having been achieved a long time ago now. So was my reaction.

THIS NOT ENTIRELY TRUE, MODIFIED AND UPDATED, UPGRADED VERSIONS OF THE SA-3 EXISTING IN PROFUSION, NOT SO ANTIQUATED AFTER ALL.

According to the wiki:

1. "Since Russia replaced all of its S-125 sites with SA-10 and SA-12 systems, they decided to upgrade the S-125 systems being removed from service to make them more attractive to export customers."

2. "Released in 2000, the Pechora-2 version features better range, multiple target engagement ability and a higher probability of kill (PK). The launcher is moved onto a truck allowing much shorter relocation times. It is also possible to fire the Pechora-2M system against cruise missiles. Deployment time 25 minutes, protected from the active interference, and anti-radiation missiles"

3. "In 1999, a Russian-Belarusian financial-industrial consortium . . . was awarded a contract to overhaul Egypt's S-125 SAM system. These refurbished weapons have been reintroduced as the S-125 Pechora 2M."

4. "In 2001, Poland began offering an upgrade to the S-125 known as the Newa SC. This replaced many analogue components with digital ones for improved reliability and accuracy. This upgrade also involves mounting the missile launcher on a WZT-1 tank chassis (a TEL), greatly improving mobility and also adds IFF capability and data links. Radar is mounted on an 8-wheeled heavy truck chassis (formerly used for Scud launchers). Serbian modifications include terminal/camera homing from radar base."

5. "Cuba also developed a similar upgrade to the Polish one, which was displayed in La Habana in 2006."

6. "Later the same year [2006], the Russian version was upgraded again to the Pechora-M which upgraded almost all aspects of the system - the rocket motor, radar, guidance, warhead, fuse and electronics. There is an added laser/infra-red tracking device to allow launching of missiles without the use of the radar."

7. "There is also a version of the S-125 available from Russia with the warhead replaced with telemetry instrumentation, for use as target drones."

Well, do you need more!

These missiles being attacked by the Israeli originally reported to be SA-8 Gecko. Mobile SAM that destination thought to have been Hezbollah? Or are these SA-3 targets of another Israeli operation? I am not sure.