From this Strategy Page article we find mention of the Gray Eagle UAV.

First Predator, then Reaper, then Avenger, and NOW Gray Eagle.

"The MQ-1C Gray Eagle . . . is a Medium Altitude Long Endurance (MALE) unmanned aircraft system (UAS) . . . funded by United States Army. It is an upgrade of the MQ-1 Predator."

Gray Eagle able to engage the enemy with Hellfire or Viper missile. Gray Eagle a modified and "upgraded" Predator drone having a jet engine that engine able to operate on DIESEL FUEL. 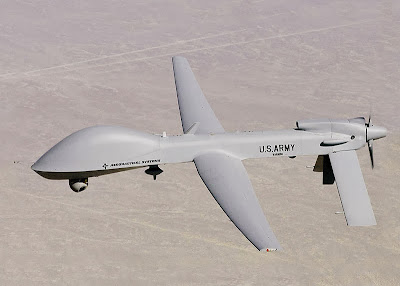 Gray Eagle has the absolute appearance of the original Predator but is smaller in size?

1. Many decades a go the U.S. Army [USA] used to have an inventory with more warplanes than the U.S. Air Force [USAF] and more warships than the U.S. Navy [USN]. Planes and ships defined in very general terms. Most fixed wing aircraft but for a select few having been scrapped a long time ago. So the usage of MALE type drones is in a limited manner a return to the past.

2. This drone can fly very high and with tremendous endurance. My question is about the 3,000 foot [1,000 meters] rule? Normally army warplanes relegated to that air space below 3,000 foot and USAF above that altitude. The advantage to the drone is able to fly so high as to unseen and unheard. Gray Eagle when deployed flies far above the 3,000 foot barrier?

3. That ability to fly greater than a full day [24 hours] without refueling in the UNARMED MODE? That full complement of armament [Hellfire and Viper] meaning less fuel carried on take-off? However that extreme endurance allowing one Gray Eagle to perform the mission of a multiple number of rotary wing aircraft for instance.

4. The COST FOR ONE GRAY EAGLE IS NOT CHEAP. About $20 million per copy not including developmental R & D costs. I thought these drones cost a fraction of fixed wing manned combat aircraft. I guess not in all cases.

5. Gray Eagle an improved version of Predator and having an autonomous take-off and landing capability, I might assume the result of enhanced software, the warplane even able to land unassisted in a strong crosswind. So these drones all the time become more and more totally automated and self-sufficient.

Sky Net not far off if almost now!