From a number of decades ago the Soviet Union was able to put to sea a hybrid vessel, an aviation cruiser what it was called, a surface warship with combined capability, carrying both long range anti-ship missiles with a contingent of fixed and rotary wing aircraft. 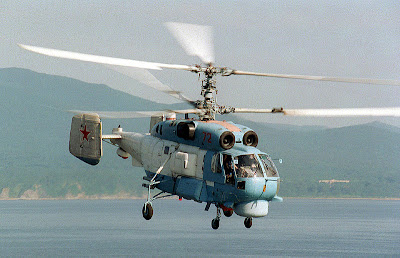 Kamov designing those choppers for the ASW mission [anti-submarine-warfare]. Using sonobouys and dipping sonar [sonar dangled from a cable and lowered from the helicopter into the water], and able to fire air-surface torpedoes [anti-submarine].

This Liaoning Chinese aircraft carrier even if equipped with a number of fixed wing aircraft [Su-33?] that main combat component might turn out to be an even greater number of Kamov helicopters as already found in the Chinese inventory.

[the Chinese do already have their own indigenous designed and manufactured ASW helicopter, but the Kamov is far more robust and has greater capability?]

The Kamov Ka-27 ideally suited for the carrier combat mission as envisioned by the Chinese, A profusion of such rotary wing aircraft at sea giving the Chinese an cheap, quick but not dirty way of achieving a degree of parity with American naval forces?

"The Kamov Ka-27 (NATO reporting name 'Helix') is a military helicopter developed for the Soviet Navy, and currently in service in various countries including . . . People's Republic of China . . . "

Variants of the Helix armed in an impressive manner to include the possible use of: [depending on the mission]

With regard to the ASM that is the Soviet/Russian Kh-35 with a range of 130 kilometers, over-the-horizon capable, roughly analogous to the American Harpoon or the French Exocet.

Fixed wing high performance aircraft such as a Su-33 for CAP [combat air patrol] high and far above the carrier at any given moment, a minimum number needed the bulk of the combat force however provided by Kamov helicopters prodigious numbers allowing for "swarming" the target given a specific mission, destructiveness nonetheless guaranteed!