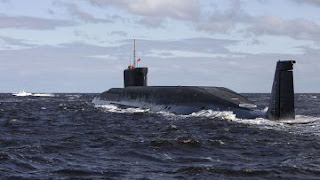 One day good, one day bad!

"MOSCOW, July 15 (RIA Novosti) - The United States was unable to detect the presence of Russian strategic submarines in the Arctic before they test-launched two ballistic missiles, a Russian intelligence source said on Wednesday."

"The first missile, flying a ballistic path, hit its designated target . . . the second, fired with a flat trajectory, destroyed a target at the Chizha testing site"

"The source said that the launch area, covered by ice floe, was heavily patrolled by Russian attack submarines and the Americans were unable to detect the arrival of two strategic submarines before the launch."

"the Russians have continued to use liquid-propelled missiles, perhaps on grounds of extensive experience and confidence in their safety, but surely because of consistent disappointment with the solid-propelled [missiles]"

* This was a Delta class boat firing from an arctic bastion. A missile firing submarine operating from within a protected area, FIRING THE MISSILES WHILE SUBMERGED - - THE WATER ON THE SURFACE COVERED PARTIALLY BY FLOES OF ICE!

* I am surprised that the Russian missile firing submarines are still using, even after DECADES of development - - liquid-fueled missiles! This is so, three generations of such missiles having been fielded? Liquid missile fuels carried on a submarine pose a great risk? Toxicity, fumes, dangerous loading operations, etc.? ONLY just before launch are such missiles fueled?

* The Skiff has the ability to be programmed for task-tailored trajectory. This too is new to me. Is not just for attacking targets at long range, can be used for "minimum and intermediate firing distance" as well? 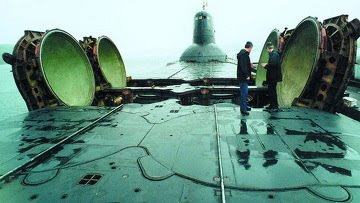 This photo gives one a good perspective as to the scale of those missile firing submersible boats. I believe this was taken from the deck of a Typhoon class Russian sub.

"Six of the 11 test launches of the Bulava have ended in failure. The launches were temporarily suspended and the missile components were tested in the labs after a series of previous failures."

Bulava is the oceanic-going submarine launched version of the land-based TOPOL ICBM. For some reason the Bulava is not working right when fired from a sub. That series of tests has a bad yield, less than 50 % working! Bugs have yet to be worked out - - reliability is questionable, BUT ONLY FOR THE SEA-BASED VERSION?

* Bulava is a solid-fueled missile, an ICBM, and intended to be used on the Borei-class of Russian sub. A sub the first of which is under construction [?] and not deploy able until 2010?