For some reason, I have an special interest in the old ways of doing things! Especially as pertains to warfare. And even more so if those "old ways" are still in use, modern times notwithstanding!

Here, the German, in World War One [WW1] and World War Two [WW2], employing with success SAILING SHIPS! Masted vessels of the old design, using sail and the force of the wind for propulsion!

* The voyages [WW2] of the German clandestine warfare vessel, the sailing ship Passim.

As commanded by a renowned German deep-ocean sailor, a master of sail and trans-oceanic crossings, Heinrich Garbers.

"the Passim, a 16 meter long sailing yacht [a yawl] which also was
equipped with an emergency engine [sometimes spelled as Passime]"

["A yawl . . . is a two-masted sailing craft similar to a sloop or cutter but with an additional mizzen mast well aft of the
main mast"]

On at least three occasions, Garbers, at the helm of the Passim, was able to complete military missions, crossing the Atlantic and down the coast of Africa, observed a number of times by allied forces, using all manner of subterfuge and disguise to evade detection!

"Garbers reached the Namibian (former Deutsch-Südwestafrika)
desert-coastline on October 5. After two of the agents went ashore
. . . Garbers set sail to go 1300 kilometers to the Bay of
Mossamedes [modern day Angola] to land the third agent."

2. "He had to transport and put ashore [Brazil] two agents, a German and a Brazilian" [this "Brazilian" was actually a black "Dutchman", William Baarn, recruited to act as a spy in Brazil. NOT a native born Brazilian.]

3. "The third journey of Garbers and the Passim went to Argentina with two agents and a load of medicine for the Argentinians."

"When captured in May of 1945, Heinrich Garbers was interrogated by
the CIA [OSS] who wanted to know which U-boats Garbers had used on his different secret journeys . . . but when he told that he had [used] a sailing yacht, they didn't believe him!"

"A windjammer was a type of sailing ship with a large iron or steel hull, built to carry cargo in the late nineteenth century and early twentieth century."

"SMS Seeadler (Ger.: sea eagle) was a three-master windjammer (1916 to 1917). She was the one of the last fighting steam/sail ships to be used in war when she served as a merchant raider with Imperial Germany." 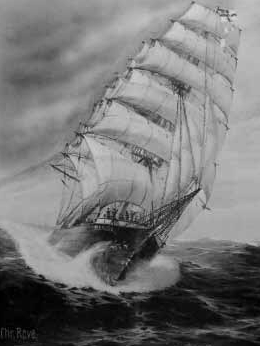 "The Seeadler was equipped with an auxiliary engine, hidden
lounges, accommodation for additional crew and prisoner sailors,
two hidden 105 mm cannons that could emerge from the deck . . .
two hidden heavy machine guns, and rifles for boarding parties."

"During [a period of] 225 days [1917] she captured 15 ships in the
Atlantic and Pacific and led the British and US Navies on a merry
chase."

The Seeadler was poorly armed, but adequate for the task. Most of the time powered by the wind, using sail, having an auxiliary motor if needed? AND IN EACH AND EVERY INSTANCE, OVERTOOK, OVERPOWERED, AND CAPTURED AN ENEMY MERCHANT VESSEL THAT WAS A STEAM SHIP, FORCING SURRENDER!

The Seeadler, commanded by von Luckner, a man who in a time of war and extreme violence, seemed to eschew violence, taking great pains to operate in as chivalrous a manner possible!