Regarding the bombing of Rotterdam, Netherlands, during World War Two [WW2]. The generally accepted historical accounts are inaccurate and misleading?

That the very center of Rotterdam was bombed to oblivion by German Luftwaffe aircraft, 1940, is beyond question. This did happen. One square mile in the center of the city received the full weight of a saturation bombardment by a massed German air fleet! A blitzkrieg generally thought to have been a war crime! 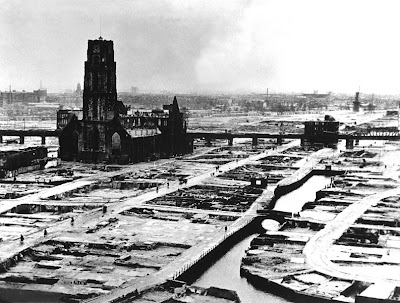 The full circumstances of what occurred - - however - - is unclear?

[I have previously had a blog entry on the bombing of Rotterdam, following the conventional “party” line!!]

The German, and more specifically, Hitler, did NOT act in the manner of the barbarian, the beast, the animal, the perpetrator of atrocity?

According to the conventional historical accounts of WW2, Rotterdam was:

* Bombed ONLY AFTER Dutch surrender!

* Bombed ONLY at the insistence of Hitler. Hitler in a fit of rage - - reacting to reports that the German paratrooper commander Student had been shot by a Dutch sniper.

The “conventional historical accounts” are in part right and wrong?

* Rotterdam just prior to the bombing was defended by Dutch troops, the German not able with mere ground forces to compel surrender of the Hollanders. Rotterdam was not an open city, undefended! Was a legitimate target of war!

* The German air fleet launched PRIOR to Dutch surrender, arriving on the scene WHILE negotiations with the Dutch were proceeding.

* That German air fleet unloading their ordnance on the center of Rotterdam did so thinking that their bombs were dropping on Dutch military targets, in support of German ground forces!! And that combat WAS STILL ON-GOING!

* Efforts were made to “signal off” the German air fleet, but this effort went for naught!!

* Student was indeed shot during the Holland campaign, BUT NOT by a Dutch sniper. Was hit by a stray German bullet!

The perception that Hitler went into a rage is perhaps correct, but the man DID NOT order the bombing of Rotterdam in retaliation for a sniper attack upon General Student!

There is also mention of A SECOND bombing of Rotterdam during WW2. More later on that topic? I have to research!

The saturation bombardment of Rotterdam was intense and unexpected. This was not close-air-support as the term is generally and commonly understood! But not necessarily an atrocity as we usually define the word.

“History is like a constantly changing tree” - - D. Irving.