"If I see that the Russians are amassing their planes for an attack, I'm going to knock the shit out of them before they take off the ground" - - Curtis Lemay.

During the period of the Cold War [1945-1990], perhaps no American military air force base [AFB] exceeded in importance the Thule AFB installation??!!

Ideally suited, in the far north as it was, for both OFFENSIVE AND DEFENSIVE MILITARY AIR ACTIONS AGAINST THE SOVIET UNION!!

"an air base that could be used to intercept bomber attacks from northeast approaches to America, and as a refueling point for long range bombers potentially directed at the Soviet Union. Midway between Moscow and New York" 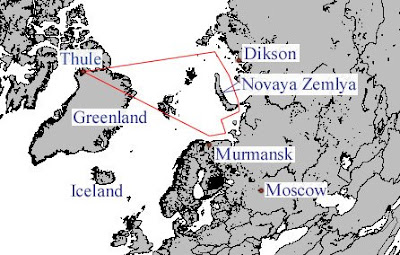 "The shortest route from the US to the Soviet Union’s most important industrial areas was over the North Pole, and Thule is at the precise midpoint between Moscow and New York City. Thule became a key point in the whole American military strategy."

Thule, Greenland, NATO territory governed by Denmark, sparsely populated to say the least, almost uninhabitable, became "KEY TERRAIN" in the era of the MANNED BOMBER AIRCRAFT, prior to the advent of the inter-continental ballistic missile [ICBM]!

A military air base, existing primarily subterranean, a critical point from which the controversial "Project Homerun" missions were launched!!

"From 21 March through 10 May 1956, General LeMay ordered SAC reconnaissance units to conduct Project HOMERUN. This was a massive aerial reconnaissance effort to probe, identify and track the entire northern frontier of the USSR."

"Before the project ended, six RB-47E’s made a massed formation overflight taking photographs across a large area of the Northern USSR."

HOMERUN missions, absolutely vital to the American strategic defense planning effort, were eminently successful!! "Not one mission was ever recalled" - - "without the loss of a single aircraft"!

"Knocking the shit out of them" presumably would have been done by American nuclear equipped bomber aircraft flying out of Thule!!