"A nation consists of people, laws and land, of which only the latter is permanent!" - - A. Lincoln.

Here is a topic that is a favorite of mine. The Canadian Rangers. A quasi-military unit, reservists, natives ["Inuit, First Nations, Metis and Occidentals"] patrolling the Canadian arctic regions, SHOWING THE FLAG, MAINTAIN A PRESENCE THAT AFFIRMS CANADIAN SOVEREIGNTY IN THE ALMOST TOTALLY UNINHABITED ISLAND REGIONS OF FAR NORTH!!

"The Canadian Rangers . . . a sub-component of the Canadian Forces reserve, which provide a military presence in Canada's sparsely settled northern, coastal, and isolated areas . . . the primary role of this part-time force is to conduct surveillance or sovereignty patrols (SOV PATS) as required. Some Canadian Rangers also conduct inspections of the North Warning System (NWS) sites and act as guides and scouts when southern forces are in their Area of Operations"

Quasi-military units, reservists, continuing to be armed with the BRITISH SMLE RIFLE!! A weapon, bolt-action .303 caliber, first designed and fielded OVER ONE HUNDRED YEARS AGO NOW, STILL STANDARD ISSUE, IDEALLY SUITED FOR ARCTIC OPERATIONS!!! SMLE rifles carried to ward off dangerous attack by a predatory and charging polar bear!! A bear intent on killing and EATING YOU!! 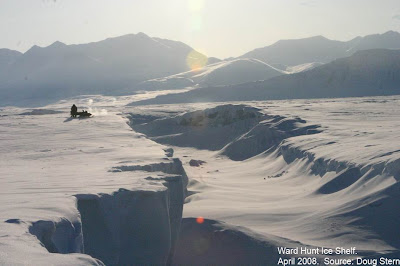 This photo shows a Canadian Ranger inspecting a crack in the ice shelf, vicinity Ellsmere Island.


Expect the Canadian Rangers to be deployed more often in the future? Canada is VERY interested in the Arctic north, continuing to maintain a dominion over land that is coveted by others. Whom ever those "others" maybe. Rangers on the scene making it clear, "this is ours - - mind yourself!!"