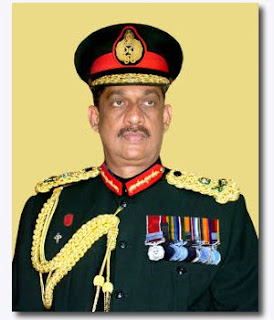 Those of you that intensely follow the world news are undoubtedly aware that the last remaining stronghold of the Eelam Tamil Tigers has been captured by the army of Sri Lanka. A war that has lasted since 1982 has now come to an end? The Tamil Tiger commander has been killed [along with his son], and the order has been issued for all remaining Tigers to lay down their arms.

Here is the man largely responsible [??] for the defeat of the Tigers.

"General Sarath Fonseka . . . is a Sri Lankan Army officer who has served throughout the Sri Lankan civil war and been the Commander of the Sri Lanka Army since December 6, 2005 . . . . His continuing run of significant military victories . . . has led the Indian National Security Advisor Mayankote Kelath Narayanan to describe him as the best army commander in the world"

From the last name, it is reasonable to assume that General Fonseka is a "burger"?

A "burger", a descendant of Portuguese military men, mercenaries, that entered into the area of the Indian sub-continent four to five hundred years ago.

Men and their offspring thereof, "burgers" [city-dwellers], who married local women, established a permanent local residency, and now for a half a millennium have played a prominent role in Sri Lanka political and social life.

And it is not unreasonable to describe General Fonseka as "the best army commander in the world"? NO! General Fonseka has achieved victory where prior such an achievement was deemed very difficult to impossible. The Eelam Tigers were a very hard fighting, resilient, resourceful and devoted group of insurgents. Made for difficult opponents. Fonseka was able to succeed where other commanders could not?

Success is success and cannot be argued with? The proud military tradition of the "burgers" continues unabated!