Here are some items that randomly caught my attention:

"At night, around 8pm, 37 Japanese torpedo boats and 21 destroyers were thrown against the Russians . . . The Russians were now dispersed in small groups trying to break northwards. By 11pm, it appeared that the Russians had vanished, but they revealed their positions to their pursuers by turning on their searchlights — ironically, the searchlights had been turned on to spot the attackers."

Japanese destroyers and torpedo boats, in the aftermath of the DAYTIME clash at sea - - Tsushima - - 1905 - - pursued the Russian enemy [in the manner of wolves pursuing a fleeing prey] and launched NIGHT TIME ATTACKS. 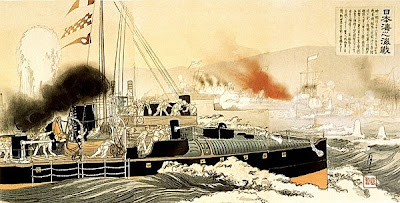 Attacks facilitated BY THE RUSSIANS THEMSELVES!! Russian ships, turning on searchlights, in search of pursuers, marking themselves and making their locations obvious!! 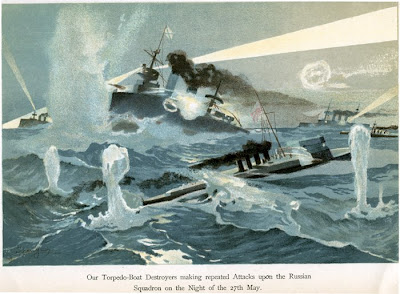 RUSSIAN NAVAL INEPTNESS DURING THE RUSSO-JAPANESE WAR OF 1905 MANIFESTED ITSELF TIME AND AGAIN!? IT WOULD SEEM SO!! THAT RUSSIAN FLEET INDEED WAS "A FLEET THAT HAD TO DIE"!!

"From early 1944 . . . The U-boat force was still numerically impressive, with a total of 449 submarines in commission. Of these, 287 were still undergoing trials or crew training, and 162 were operational, with an average of 43 at sea on any one day. But all were effectively obsolete, and increasingly viewed by their crews as 'iron coffins'".

This too will surprise many. The German did have a lot of active and commissioned U-Boats by 1944. In spite of Allied strategic bombing, the manufacturing captactity of the German munitions factories under the direction of Speer went more or less unabated.

AND YET, AT ANY GIVEN MOMENT, LESS THAN 10 % OF THE COMMISSIONED U-BOATS WERE ACTUALLY AT SEA, ON STATION, SEEKING TARGETS. THAT IS TO EMPHASIZE SUBMARINES AT SEA. IN ADDITION, A PORTION OF THAT LESS THAN 10 % WOULD BE RETURNING TO BASE, TORPEDOES HAVING BEEN EXPENDED, FUEL LOW AND FOOD AND FRESH WATER LOW, COMBAT EFFECTIVENESS NEAR ZERO!!

Such percentages out of the whole being not combat effective and not deployed and not actually engaging in combat was a common issue in all of World War Two [WW2] for all belligerents? Numbers on paper were only a small fraction of the story?

A maximum effort where a goodly number of the whole available were deployed on station and combat effectives was NEVER A POSSIBILITY?!