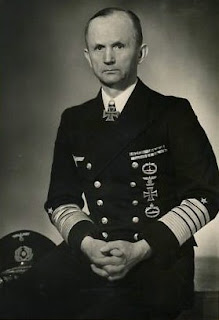 Concerning the Battle of the Atlantic, the German U-Boat campaign against allied shipping, and the usage of what became known as "wolf pack" tactics by Doenitz:

"U-boat movements were controlled by the . . . 'Commander of Submarines' . . . U-boats usually patrolled separately . . . only being ordered to congregate after one located a convoy and alerted the BdU, so a Rudel consisted of as many U-boats as could reach the scene of the attack."

"The first U-boat to spot the convoy would signal its position to U-boat headquarters, and send out homing signals to assemble the rest of the pack."

U-Boats, normally operating SEPARATELY, but massing for a CONCERTED ATTACK upon an allied convoy only on orders of the central U-Boat command of the KriegsMarine.

And that first U-Boat to make contact with and shadow a convoy:

"send out homing signals to assemble the rest of the pack"

NO! Sending out a beacon for other U-Boats to "home" in upon was not an option? NOT used by the German submariners. This is a misconception.

Here, thanks to Harry and KTB http://www.sharkhunters.com - - we have the real story!! From a U-Boat commander, a flotilla commander, one that would know!!

"I did not hear any beacon during the last war." [World War Two that is]

This thanks to JO. Again, a German U-Boat commander, "a flotilla commander, a man - -[who] was in charge of assembling the wolf packs in the Arctic Ocean........... at age 95, still mentally as sharp as ever."

If any man would know, it is JO that would know!! NO beacons to gather the U-Boats for a mass attack. Was not used!!