Thanks to our good friends at The Barents Observer some material of an obvious interest.

Continued testing of nuclear powered Russian weaponry vicinity the Barents Sea as you might expect of great concern to the Norwegian.

“We should expect development and testing of new, advanced weapons systems in the areas east of Norway. Several of these will have nuclear propulsion systems,”- - Director of the Norwegian Intelligence Service, Lt. Gen. Morten Haga Lunde.

Spew of nuclear radiation inadvertently released as a result of abortive nuclear propulsion testing contaminating the Barents sea. Spew as released seemingly in a callous manner repeatedly so and of no concern to the Russian. 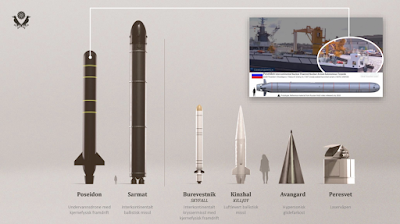 And we are not even talking about the release of radioactive particles from the recent Losharik incident. From the Norwegian perspective fisheries of great importance to their nation at stake. And their impotence at being able to control or mitigate "radioactive spew" from Russian missile and weapons testing obvious.