Sworn to secrecy agreements have now expired and the truth can be told?

Mini-submarines as operated by the Soviet Navy intruding into territorial waters of a foreign nation. Clandestine military operation using submersibles with A TRACKED CAPABILITY?

1. "Soviet mini-sub discovered in Jarfjord by Norwegian special forces in 1990"

"A former officer from the Headquarters of the Armed Forces in Northern Norway told about the surfacing submarine in a TV documentary . . . about the Cold War."

INTRUDER GLIMPSED SURFACING ONLY ONCE AND THEN FOR A MERE BRIEF INSTANT. VEHICLE TRACKS ON THE SEA BED INDICATING A SUBMERSIBLE IN THE AREA, TRACKED AS WOULD BE A CONVENTIONAL ARMORED VEHICLE AS USED BY MILITARY GROUND FORCES.

Additionally from the H. I. Sutton Internet web site devoted all things submarine:

"A spate of submarine incursions led to the suspicion that the Soviet Navy was operating tracked submersibles in Swedish waters. Track marks were found on the sea floor but the exact submarine(s) responsible has yet to surface. In the 1980s, Mana (Swedish naval intelligence . . . wrote a report which included several sketches of the tracks and hypothetical illustrations of the types of submarines which could have caused them. They suspected that Russian diesel-electric submarines  . . . operated as host submarines for smaller midget submarines and combat swimmers. Some of the midget submarines were believed to be responsible for the parallel track marks." 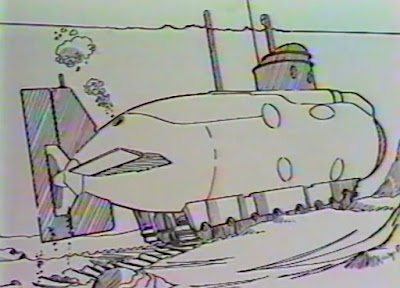 Finally and in conclusion also from the H. I. Sutton Internet web site and thanks to same:

"Conclusion It does appear most likely that the marks were left by some sort of manned tracked submersible which is unknown in public sources. It was probably a dry-sub as opposed to a wet-sub like most Swimmer Delivery Vehicles (SDVs)"

A "dry-sub" as meaning personnel not having to wear a wet suit and breathing from SCUBA gear.