From a NavWeaps Forum [Naval Weapons] we have a discussion of a problem of modern concern but as was originally perceived from over fifty years ago now.

Thanks to bager1968 for the input.

That solution as proposed again from over fifty years ago now a VSTOL aircraft greatly resembling the current American Osprey. This was the Canadian CL-84. 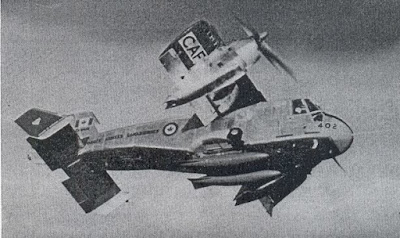 CL-84 SCS (Sea Control Ship version) as to be used for ASW/AEW mission. Fuel tanks on the bottom? Image from NAVWEAPS forum.

"This was the planned production version being developed when the program was cancelled in the aftermath of the cancellation of the USN SCS program."

"The CL-84/SCS was intended as an ASW/radar surveillance aircraft for operations from a short flight deck, like the various Spruance DDV proposals . . . [or a] Sea Control Ship [SCS]." 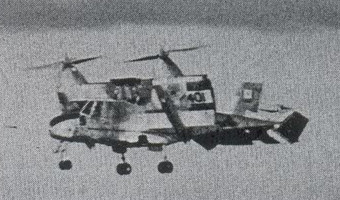 Yet one image, another perspective of the CL-84 in flight. VSTOL. This was state-of-the-art aviation technology at the time.

Modified Osprey warplane able to be configured to perform the same type of missions as was envisioned for CL-84? Has consideration been to such measures being taken? I cannot say.

Let me remind you each time you remove a F-35 VSTOL combat warplane and replace with a Osprey or similar that reduces your SCS combat potentiality. Obvious.