"The Libyan National Army (LNA) said it shot down a Turkish drone over Tripoli, shortly after its leader General Khalifa Haftar called for a holy war against Turkey for supporting a rival government. On Friday, the LNA said it had shot down a Turkish drone south of Tripoli, the seat of the Government of National Accord (GNA). One report identified it as a Bayraktar TB2 armed drone, downed after targeting a column of LNA vehicles." 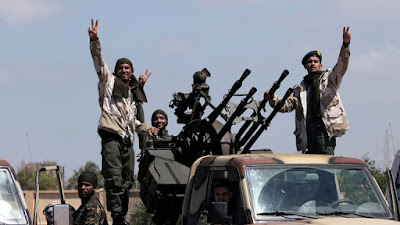 Four-barrel Soviet era 12.7 mm AAA Dhuskha. This evidently is not the weapons system that shot down the Turkish armed drone. Russian Pantsir to blame for the shoot-down. Pantsir a much more sophisticated AAA system. Uses gunfire and missiles both, radar guided. Formidable.

Babak Taghvaee: @BabakTaghvaee "#BREAKING: An hour ago, 2 #Turkish Bayraktar TB2 armed drones supporting Islamist militias of #GNA targeted a convoy of #Libya National Army on its way to #Tripoli at Mizda. 30 mins later one of them was shot-down by a Pantsir S1 SAM system of #LNA in south of #Mitiga airport!"

See further and perhaps even more important so the topic the Second Libyan Civil. Greatly resembles the situation in Syria. So many players and actors foreign and domestic.