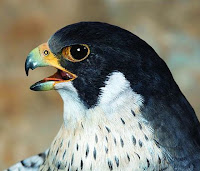 "MI5's unit with a daily licence to kill: WW2 squad shot down 'Nazi' falcons who were eating our carrier pigeons"

LICENSE TO KILL BUT NOT JAMES BOND!

"At the height of the Second World War, a crack MI5 unit was given the task of taking down the enemy in the skies over Britain."

"The hawks were picking off homing pigeons returning from Europe with vital information. Some pigeon owners even feared they were German-trained and working for the Nazis. So the Falcon Destruction Unit [FDU] was born."

HOMING PIGEONS AS SUPPLIED TO THE ANTI-NAZI RESISTANCE IN EUROPE CARRYING MESSAGES OF INTELLIGENCE VALUE HAVING TO TWICE RUN A GAUNTLET OF RAPTORS. GERMAN AND ENGLISH BOTH.

"The five-strong armed team covered the south coast, led by a retired Irish colonel and champion shot. They would scour the clifftops for nests, and abseil to set spring traps. Birds not caught in traps were shot."

See previous additional and germane blog entry as applicable to the topic: