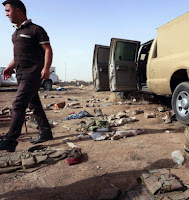 That Iraqi offensive the objective the capture of Mosul now stalled? According to DEBKAfile this is so! Again from the newsletter and copied almost in entirety.

"Obama vs. Baghdad on Sunni cleansing of Mosul"

"A major dispute on combat tactics which has sprung up between Washington and Baghdad hangs over the coalition's Mosul offensive after three days of combat. Thursday, Oct. 20, President Barack Obama and US commanders challenged Iraq's Shiite Prime Minister Haydar al-Abadi and his generals over a 500km long route, the Ba'aj Road, which does not appear on maps, but is pivotal for the offensive's continuation . . . This route is a kind of 'Burma road' developed by the Islamic State as a private corridor between Mosul in Iraq and Raqqa, the terrorist group's Syrian capital, during the terrorist group's two years of control. The argument flared over a demand by President Obama and US commanders that Iraqi government forces turn to the Syrian border and block the Ba'aj Road, and so cut off the ISIS fighters' escape and supply route from Mosul to Syria. The Americans can't bomb the corridor because it is also packed with a stream of refugees in flight from the fighting in Mosul. However, according to our sources, the Iraqi prime minister countered this demand with a proviso unacceptable to Washington. He was prepared to order Iraqi forces to block the Ba'aj Road provided Mosul's entire population of 750,000 Sunni Muslims was expelled from the city. He argued that ISIS could not be defeated until then because some of the Sunnis were supporting and collaborating with the Islamist terrorists. Obama fiercely opposes the mass expulsion, seeing it as an attempt by the Shiite prime minister to cleanse Iraq's second city of its Sunni inhabitants and using the Mosul offensive against ISIS as a pretext for such action."

This "Burma Road" of the Islamic State was not taken into consideration during planning for the Mosul operation? American warplanes, the ace up the sleeve of the allied force not able to engage enemy targets such is the numbers of refugees fleeing the embattled city?