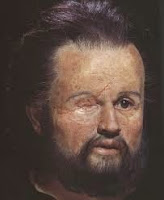 From the Internet web site of Professor Victor Davis Hanson we have an analysis of Vladimir Putin and his perceived aggressive stance and geo-political machinations of the highest order.

Professor Hanson learned in the Classics and ancient military strategy.

When the Professor speaks we all need to listen and closely.

That analysis of Professor Hanson based on an analysis and perspective of the historical record thousands of years old.

Philip of Macedon the man with one eye. Father of Alexander the Great and also a practitioner of advanced state craft in the venerable and ancient tradition. As Vlad does today would be well understood by Philip.

"Nothing that Vladimir Putin has done in gobbling up territories of the former Soviet Union is new. In fact, he simply apes every tyrant’s time-honored four-step plan of aggression."

THAT FOUR-STEP PLAN TO INCLUDE:

"From Philip of Macedon to Napoleon, aggressors did not necessarily have a grand timetable for creating an empire. Instead, they went at it ad hoc. They took as much as they could at any given time; then backed away for a bit, if they sensed strong opposition was building — only to go back on the offensive when vigilance waned."

"All dictators feign craziness, or at least exaggerate their undeniably unhinged tendencies. Appearing capable of anything was always a dictator’s advantage . . . Demosthenes warned Athenians about the obsessed, one-eyed, limping Philip II, who would ruin every part of his hideous body to destroy the free city-state."

"Aggressive autocrats always have had a list of perceived grievances, what Thucydides once called prophases."

"For Philip, the pretext was supposedly Athenian aggression in northern Greece and cultural and racial disdain for his Macedonians.":

"Every aggressor also advances sophisticated lies. These narratives appeal to the better angels of the naïve. They always seem somewhat logical, at least superficially."

"For Philip, it was a grand Pan-Hellenic crusade under his aegis against the real enemy of Greek freedom: the slavish and effeminate Persian Empire."

"Nothing Putin is doing is novel, from his on-again, off-again digestion of nations, to his feigned uncouthness, to his victimization, to his idealistic and ecumenical agenda."

"Putin is scary because his time-worn method of aggrandizement is as predictable as it is usually effective."

And thank you Professor Hanson.

C'mon, We started the Ukraine problem by using a coup.

Vlad reacted by playing smart to our dumb. Don't blame him for being sharper than the aces at Foggy Bottom and DoD.