Thanks to the SmallWarsJournal - - here with material dated in some instance but still useful as a point of reference, as to the "submarines" used by the drug smugglers of the Latin American drug cartels.

"Submarines", for the most case semi-submersibles originally, but now found in ever increasing sophistication and capability. Generations already of "submarines", CLASSES EVEN! Most recently true submarines in every sense of the word, presenting an ever increasing threat NOT easily countered.

This is a semi-submersible as used by the drug cartels?

"Submarines" NOW being the vehicle of choice to smuggle cocaine into the U.S.?

"Submarines" having a foreign connection [Russian]. Perhaps ex-Soviet or Russian military, EVEN underwater experts of the naval Spetsnaz persuasion?

"Colombian authorities have found seven of the secret shipyards since 2007. In each shipyard, 15 workers spent up to a year building a single boat. They built the hulls and then installed the engines and propellers. A boat agents managed to seize last summer before it was sunk measured 17 meters (56 feet) long and weighed 46 tons. There were 10 tons of cocaine in the vessel's hold."


This particular sub is all-metal, and a true submersible [described as semi-only], in the tradition of a military midget submarine, with pretty good capability? The design does look sophisticated from this image.

"Nimmich: . . . they refined the semi-submersibles. We talk in terms of three generations of semi-submersibles. The new ones have steel construction, two engines, larger capability, more fuel, and greater distance capability. They can go longer distances by themselves. Between 3,000 and 3,500 miles (4,800 and 5,000 kilometers)."

"The first generation subs found in 1999 were around 78ft, and Russian nationals were involved in the construction."

"The Submarine Next Door"

"Before that, in the mid-nineties some Russian mob guys . . . were in negotiations with a cartel to provide an old Soviet diesel sub fully crewed. They had already sold some heavy lift helicopters to the cartels to run chemicals out to labs in the jungle" 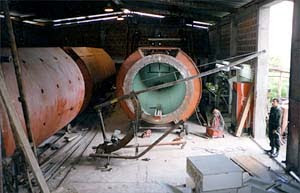 And here are the various sections of the hull, under construction, of an all-metal sub of pretty large size, sophisticated, awaiting welding or further fabrication! These are not play things by any means! This particular class or version was meant to be a true sub in every sense of the word?

We should not be surprised that Russians are intimately involved with the Latin American drug cartels. That Colombian special operations commando unit that hunted down and eliminated the notorious drug kingpin Pablo Escobar had to fight and kill the best mercenaries in the world, English and Israeli. For a price, you can hire and use the expertise of anyone to accomplish your goals. And for the Latin American drug cartels, price is often not an object!! Money is more or less unlimited!

One generation, two generations, three generations - - MORE! Expect soon to see these vessels have an offensive capability too! What next?