Here are atomic cannon from the era just subsequent to the end of the Korean War, American and Soviet.

Weapons - - awesome - - but obsolete almost at the time of initial deployment. And when deployed, having only very limited numbers, those artillery pieces having also a very limited capability against targets. 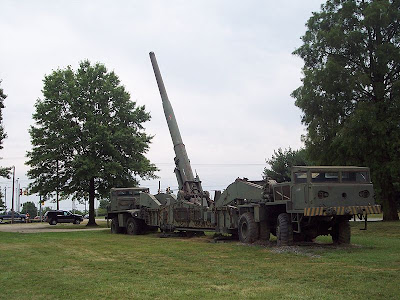 "the M65 Atomic Cannon, often called Atomic Annie, was a towed artillery piece built by the United States and capable of firing a nuclear device. It was developed in the early 1950s and fielded by 1953 in the European and Korean theaters."

"used the German K5 railroad gun as a point of departure for the carriage. The name "Atomic Annie" likely derives from the nickname "Anzio Annie" given to a German K5 gun which was employed against the American landings in Italy."

"Annie" holds the distinction of having fired the ONLY nuclear shell DETONATING ON TARGET!! This was Grable detonated at the Nevada test range when above ground detonations were still permissible!

"This was the first and only nuclear shell to be fired from a cannon."

2. Soviet 2A3 self-propelled howitzer. Nuclear capable! Developed in reaction to the deployment of the American M65. 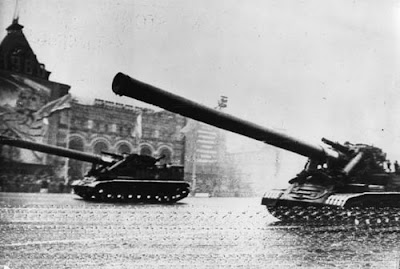 "2A3 originated during the Cold War . . . [the] Soviet Union started its own program to develop a 406mm self-propelled howitzer capable of firing nuclear projectiles which was codenamed 'Objekt 271'."

3. Soviet 2B1 "Oka" self-propelled mortar. Again, nuclear capable. NOT a cannon or artillery piece but a MORTAR! "Objekt 273". 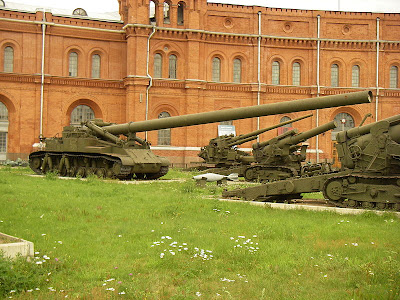 "(Object 273), was designed and built by the Kirov Plant. Its 20 meter barrel allowed it to fire 750 kg rounds up to 45 km. Due to its complexity of loading it had a relatively low rate of fire - 1 round every 5 minutes."

* Almost simultaneously with development and deployment to the field, these various atomic cannon were rendered obsolete by rockets and missiles also under development.

* All these various units [systems] were manufactured in very small numbers. Or were only experimental to begin with in the case of the "Oka"! BUT - - you did not need large numbers of these ponderous "beasts" in the first place. Just a few could have done the job, rate of fire being not that much of a consideration.

* The engineering of a nuclear "round" to be fired by these various atomic cannon was a technological achievement of the first order. A nuclear "round" would have subjected to all sorts of stresses upon being fired. The "innards" were very susceptible to failure? The smaller size bore of the M65 as compared to Soviet analogs indicates an American technological superiority during that specific era and time [1950's]?

* Please note the push-pull [?] design of the M65! Two prime movers, one front and one rear! There was a severe drawback to this design! The complete unit, prime movers and artillery piece combined weighed in at 85 tons! Very few bridges in Germany and even fewer in Korea could ever accommodate such a weight and NOT collapse. Mobility of the M65 was severely compromised and LIMITED!