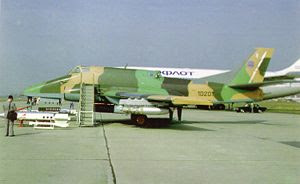 Armored warplanes designed specifically to attack ground targets, drop bombs, strafe with cannon fire, all in tactical support of the ground forces. A killing machine with a lot of firepower, also able to take a lot of punishment while in furtherance of the mission.

In this case, the Il-102. Two-seater military combat aircraft, again, as with the Il-40, having the rear-ward facing tail gunner firing a remotely-operated cannon in defense of the warplane. For whatever reason, even many years after the end of WW2, the Ilyushin design bureau feeling the incorporation of the tail-gunner being an important factor for a ground attack airplane.

"The Ilyushin Il-102 was an experimental jet powered ground-attack aircraft designed by Ilyushin. This aircraft was never chosen for production . . . only a few development prototypes were built"

The Il-102 based upon an original concept from THIRTY YEARS EARLIER!

"in 1967, the Soviet Air Forces drew up a specification for a jet powered . . . armoured ground attack aircraft . . . Ilyushin proposed a modified version of their Il-40 of 1953 under the designation Il-42 . . . [which] was a two seat aircraft with a remotely controlled rear gun turret. The design was rejected by the Soviet Air Forces."

The Su-25 being the Soviet/Russian aircraft of choice. A single-seater aircraft NOT having the rear gunner firing the rearward mounted tail gun. The Su-25, NATO reporting name "Frogfoot", seeing extensive combat during the Soviet incursion into Afghan.

We have to take special note of that remotely-fired rear-ward facing cannon as found on the Il-102. A double-barreled cannon having some interesting features. 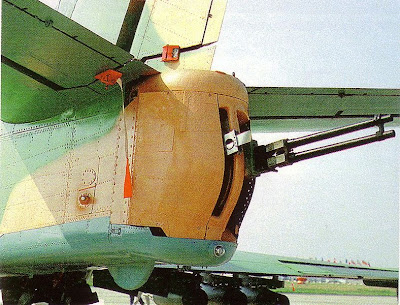 "The Gryazev-Shipunov GSh-23 (??-23) is a twin-barreled 23 mm automatic cannon developed in the Soviet Union, primarily for military aircraft use."

"The GSh-23 works on the Gast Gun principle developed by German engineer Karl Gast of the Vorwerk company in 1916. It is a twin-barreled weapon in which the firing action of one barrel operates the mechanism of the other"

"it had the unusual ability to fire infrared flares and chaff rounds, allowing it to function as both a weapon and a dispenser of anti-missile countermeasures."

Sure! The pilot is so busy with those targets in front of him, he does not have the mental or physical wherewithal to deploy chaff, infra-red countermeasure flares, etc., and do so effectively.

Allow the rear gunner to do that.