"May there not be methods of using explosive energy incomparably more intense than anything heretofore discovered? Might not a bomb no bigger than an orange be found to possess a secret power to destroy a whole block of buildings—nay, to concentrate the force of a thousand tons of cordite and blast a township at a stroke?" - - Winston Leonard Spencer Churchill, 1924.


Here with a very "cool" image: 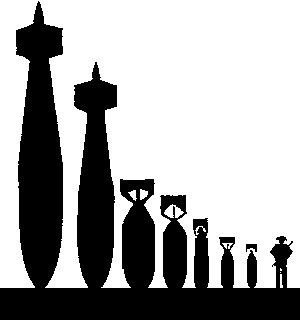 From left to right:

And further, for comparison sake:

And how exactly was Winston Leonard Spencer Churchill able to have the vision of the atomic bomb - - in 1924 - - way before the discovery of nuclear fission was even discovered? Can someone tell me that?