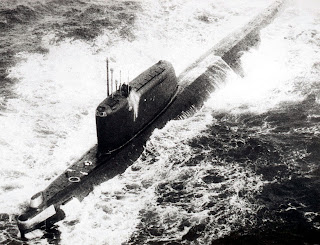 "Soviet/Russian submarines have always [?] been constructed with specially reinforced sails to withstand the 'smashing through"' [the Arctic ice cap] to the surface."

One such Soviet submarine possessing the strengthened sail was the Hotel class sub. A submarine able to "smash through" the Arctic ice cap without threat of damage. A procedure [surfacing] prior to the Hotel firing nuclear equipped missiles at American targets.

"The Hotel class is the general NATO classification
for a type of nuclear-powered ballistic missile
submarine that was originally put into service by
the Soviet Union around 1959. The Soviet designation
is Project 658."

The Hotel class submarine [of which the K-19 was the original], nuclear powered, deploying with three nuclear equipped missiles of limited range. A submarine that had TO SURFACE FIRST, FUEL THE MISSILES [LIQUID FUEL], AND THEN FIRE!!

The Hotel class as originally put to sea only being able to fire missiles when surfaced. Later versions of the Hotel class could fire when submerged.

Missiles as carried in the sail - - that sail being especially strengthened for "breaking through" the Arctic ice pack?

"The D-2 launch system on the Hotels placed three [3] R-
13 missiles in vertical containers directly behind
the sail. The submarine had to be surfaced to
launch, but all three missiles could be fired within
12 minutes of surfacing."

The R-13 missile carrying a mighty wallop, but only with very limited range:

Missiles unable to reach American cities [those located in the lower forty-eight outside of Alaska] from any point in the Arctic!

It could be reasoned that perhaps a Soviet Hotel class sub could have ventured into Canadian territorial waters and fired the three missiles, but still, that range of the R-13 leaves a lot to be desired. It would seem being able to surface through the Arctic ice cap at least for the Hotel class did not offer advantage.

That R-13 is analogous [?] to the American Polaris missile, the Polaris being far superior however. Polaris having greater range [1500 miles], solid-fuel, and could be fired from a submerged sub.