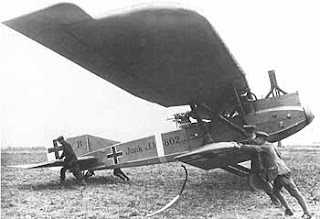 From the era or World War One [WW1] we have the Junkers I. The Halberstadt CL family of ground attack warplanes were not the only German CAS of the era.

The Junkers I also saw yeoman service during the German Spring Offensives of 1918.

The Junkers in particular ARMORED, having the "flying bathtub" armor structure protecting the pilot and tail gunner.

"The Junkers J.I . . . was a German "J-class" armored sesquiplane format warplane of World War I, developed for low-level observation and ground-attack . . . the first all-metal aircraft to enter mass production . . . its metal construction and heavy armour, which comprised an extremely advanced, single-unit armoured "bathtub" that ran from just behind the propeller to the rear crew position, and acted both as the main fuselage structure and engine mounting setup in one unit, was an effective shield against anti-aircraft artillery."

The Junkers I NOT able to drop bombs, a strafing type of aircraft, relying upon dual machine guns for firepower. Possessing too the rearward facing tail gunner providing cover and protection [also firing a machine gun]!

"They were used on the Western Front during the Kaiserschlacht {Kaiser's Battle} of March 1918 . . . none were apparently lost in combat, a tribute to its tough armoured design."

A rugged robust specimen of combat aircraft, advanced for the time. And the basics of CAS and the type of airplane most suited for the mission already having been worked out in the minds of the German military. Dedicated and sophisticated CAS airplanes of the WW1 era existed and saw good service. Much more so than realized.