"If the U.S. fielded a two-ocean navy, the Kaiser had at least a two-sea navy, operating in the Baltic and the North Sea."
This is correct. During the German naval build-up in those decades prior to World War One [WW1], the pre-Dreadnought and Dreadnought navy of Imperial Germany was required to operate in both the Baltic and North Sea.

A fleet with pelagic-going [deep blue water] capability but an orientation primarily toward the east [Russia] and west [Britain].

An intrinsic part of German naval strategy during that pre-WW1 period being the building, maintenance, and usage of the Kiel Canal.

A waterway designed to connect the Baltic and North Sea, bypassing Jutland and Denmark, allowing for an expeditious passage for warships [civilian merchant marine too] in either direction [west to east or east to west] in time of emergency or war.

"The Kiel Canal . . . is a 61 mile (98 kilometre) long canal in the German . . .that links the North Sea . . . to the Baltic Sea . . . An average of 250 nautical miles (460 kilometers) is saved by using the Kiel Canal instead of going around the Jutland Peninsula. This not only saves time but also avoids potentially dangerous storm-prone seas." 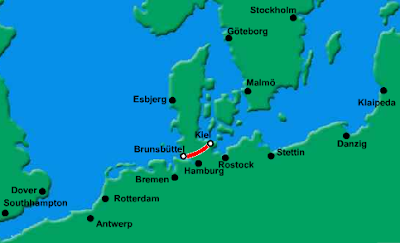 "In June 1887, construction works started at Holtenau, near Kiel. The canal took over 9000 workers eight years to build"

The canal, rendered to an extent ineffective with the naval build-up subsequent to the Dreadnought era. Pre-Dreadnought style battleships able to use the Kiel Canal, battleships of the larger Dreadnought class NOT ABLE to navigate the canal.

An ambitious program taking six years to complete, the widening and deepening of the canal by the German - - Dreadnought class German battleships by 1914 ABLE to use the canal

"It is said that part of Jacky Fisher's gambit in building the 18,500-ton dreadnoughts was to deflate Germany's willingness to compete, since to follow suit would require enlargement of the newly completed Canal . . . The Kiel Canal was duly widened between 1907 and 1914 to fit the beamier dimensions of the Kaiser's dreadnoughts."

Such was the importance of the Kiel Canal to German military and naval interests in the pre-WW1 period that the "enlargement" of the canal was correctly seen by Admiral Jacky Fisher as a PRELUDE TO WAR!

"In 1908, he [Jacky Fisher] predicted that war between Britain and Germany would occur in summer 1914, which later proved exactly accurate, basing his statement on the projected completion date of the Kiel Canal, which Germany needed to move its warships safely from the Baltic to the North Sea"

To what extent historians have been able to determine German war-making machinations in 1914 based upon the completion of the canal "enlargement" project is a mystery to me. Conventional wisdom would suggest that the ability of the German navy to move Dreadnought class battleships through the canal was NOT EVEN a consideration in the final decision process.

The German TOP SECRET naval plan in 1914 was that there WAS NO plan!!