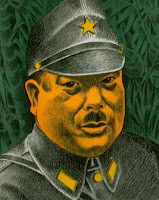 "between October 9, 1944 and September 2, 1945: at Manila and at other places in the Philippine Islands, while a commander of [the] armed forces of Japan at war with the United States of America and its allies, [he] unlawfully disregarded and failed to discharge his duty as commander to control the operations of the members of his command, permitting them to commit brutal atrocities and other high crimes against people of the United States and of its allies and dependencies, particularly the Philippines; and he, General Tomoyuki Yamashita, thereby violated the laws of war."

THE INDICTMENT, TRIAL, CONVICTION AND EXECUTION OF THE JAPANESE GENERAL YAMASHITA [THE  TIGER OF MALAYA] IN THE AFTERMATH OF WW2 CONTROVERSIAL AT THE TIME [1945] AND REMAINING A CONTROVERSIAL TOPIC.

Yamashita NOT having ordered the massacres of Filipino civilians nor in contact with the troops that perpetrated the atrocities.

It is worth noting however that during the Malayan Campaign troops under the  command of Yamashita did commit atrocity, prior and in the aftermath of British surrender.

This too. Sikh soldiers of the British Indian Army captured by the Japanese at Singapore used for target practice. Post-surrender!

A JAPANESE ARMY PATTERN OF ATROCITY OBVIOUS DURING THE ENTIRE WAR AND EVEN BEFORE PEARL HARBOR. STILL THE YAMASHITA CASE PROBLEMATIC?