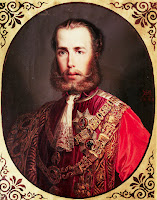 This is coolbert:
"A great power is a sovereign state that is recognized as having the ability and expertise to exert its influence on a global scale."

From the archives the Internet web site Mad Monarchist [now apparently inactive] and as extracted.

"The Austrian Empire and the Confederacy" [??]

"The American Civil War was the bloodiest conflict ever fought in the western hemisphere of the world and, as such, attracted a great deal of attention from other powers. Previously, I [Mad Monarchist] have discussed on these pages how a war between two factions of republicans [Union versus the Confederacy] actually had a tremendous impact on the monarchist cause in the Americas. Most of the ‘Great Powers’ of Europe had an interest in the War Between the States. The British Empire had an economic interest with southern cotton feeding the textile mills of England while the industrial centers of the northern states were major competitors. Indeed, only a few decades after the war ended with the north victorious, the United States of America surpassed Great Britain as the world’s largest economy and has remained so ever since. The tentative steps of the Kingdom of Spain to rebuild the Spanish Empire in Latin America, the French-backed restoration of the Mexican Empire and the French plans for a 'Kingdom of the Andes' in South America all depended on the Confederacy being victorious"
The AUSTRIAN connection Maximilian. At the behest of Napoleon III the Archduke of Austria assuming the role of puppet emperor of Mexico.
At least from my perspective Max seems to have an amiable dunce. Got in way over his head with the expectation he might achieve big things. His final fate rather standing before a firing squad.
See also previous blog entry with additional embedded links the possible intervention of Imperial Russian in the American Civil war on the side of the Union.
coolbert.
Posted by Albert E. at 7:30 PM