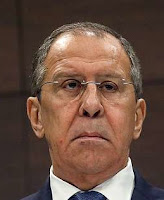 Within context of the Venezuelan crisis and historical perspective the subject of a previous post, see the discussion and comments from various Internet web site, the possibility of a military clash by foreign interventions.

1. "Lavrov certain Cuban Missile Crisis will not be repeated due to events in Venezuela"

"If there is an attempted military intervention, the overwhelming majority of Latin American countries will be adamantly opposed to that, Russia’s top diplomat said"

"Tensions over Venezuela won’t escalate into a new Caribbean Crisis or turn the country into “a second Syria,” Russia’s FM Sergey Lavrov has assured, bashing the US for treating the Western Hemisphere as its backyard."

3. "Events in Venezuela are similar to what happened in Syria – Assad tells visiting FM"

"The war in Syria has much in common with the political crisis gripping Venezuela, where outside players try to meddle in domestic affairs and undermine sovereignty, Syrian President Bashar Assad told Venezuela’s Foreign Minister."

"Much in common!" "Won't escalate!" "Overwhelming majority!" "Will not be!"

Reassurances of reassurances. "Will not be" means it will be?

You the devoted reader to the blog have to decide for yourself.