I make this blog entry with great trepidation.

WARNING! All devoted readers to the blog and those merely perusing in a casual manner.

If you are easily offended by material of an intense, adult, frank, risque' and graphic nature hit escape now.

DO NOT SCROLL FURTHER DOWNWARD! 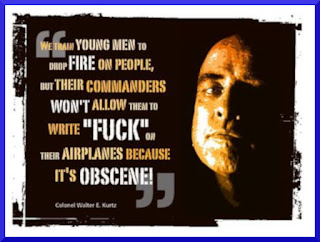 "We train young men to drop fire on people, but their commanders won't allow them write 'fuck' on the their airplanes because it's obscene!" - - Colonel Kurtz, "Apocalypse Now". As is normally the case click on images accompanying this post to see an enlarged view.

Now for the rest of the story. Thanks to Reddit and the tip from DeeDee.

THE STRANGE TALE OF THE AMERICA F-105D FIGHTER-BOMBER DURING THE ERA OF THE VIETNAM WAR WITH NOSE ART OF A "SUGGESTIVE" NATURE, ALMOST PORNOGRAPHIC BY THE STANDARDS OF THE PERIOD!! 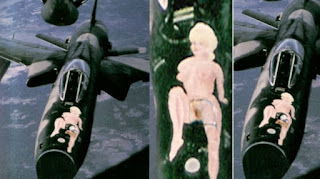 Nose art of the F-105D as seen by the boom operators of a KC-135 during aerial operations in the skies over Vietnam during the Second Indo-China War. Target for the mid-air refueling boom that particular part of the female anatomy.

"The instant Ms. Galore showed up, there were cries of  'SHE’S HERE!' and Vic [Vizcarra] can see crews crowding the boom operator window for a view, with camera flashes going off also."

"One of the most famous, or infamous, depending on your point of view, F-105D was known as Pussy Galore. This aircraft was flown by Captain Victor 'Vic' Vizcarra."

"According to an interesting post appeared on Reddit, the original Pussy Galore I marking was painted in July 1965. The idea came about as an inside joke for the KC-135 tanker crews, especially the boom operators who had trouble putting the boom into the receptacle so Capt. Vizcarra painted Pussy Galore right on the nose so that her umm………'Strategic Part' was right over the receptacle! She was named after the female executive pilot to the evil Goldfinger in the James Bond film of the same name."

"The marking itself though, didn’t last that long. It was found out by the new Wing commander three weeks after application. The commander was Robert Scott, a WW II war hero and great pilot. He immediately went apoplectic ape S_____ and ordered Galore removed on the spot! Thus ending the Pussy Galore story."

YOU WERE WARNED, WEREN'T YOU! BUT YOU DO KNOW THE REST OF THE STORY AND ARE SO MUCH THE BETTER OFF FOR IT TOO!