Once more from the Internet web site English/Russian we have a story with a military dimension.

Place this entry in the strange but true category? I had to read this article several times and think about for a while before I fully understood.

Additionally, I highly recommend without qualification or reservation the English/Russian web site. Lots of military related entries, seems to be done in a manner similar to the various English tabloids. Expect in the future more blog entries, extracts with commentary from English/Russian.

Aerial descent forces how the Soviet/Russian refers to their paratrooper units.

Container [similar in size and shape to a coffin as would contain a deceased human for burial] carrying a paratrooper and dropped from a long-range bomber aircraft as would a conventional bomb.

"A soldier lay in the box with a chute under his head . . . at the required height the pilot activated the landing of personnel with a handle. The 'coffins' opened and soldiers fell out together with their parachutes." 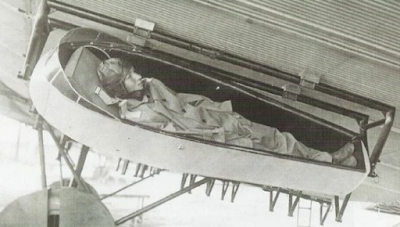 Parachutist in a "coffin". A pod that breaks open as the pod/paratrooper is dropped out of the aircraft. 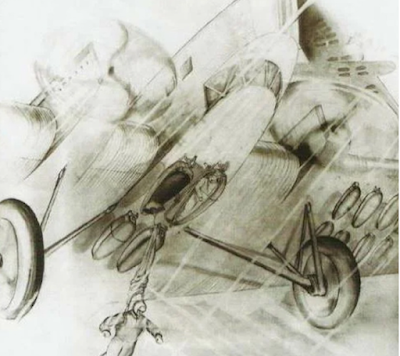 Pod is dropped out of the bomb-bay door of the long-range aircraft. Pod breaks open and parachutist descends to the ground in a normal fashion. I am not sure if this is a static-line drop or a free-fall drop. In the latter the paratrooper must pull the rip-cord to "open" the parachute.

An "invention" and concept as never coming to fruition, but at least worthy of consideration. At least to my knowledge the Soviets until the arrival of American C-47 Dakota transport warplanes via Lend Lease did not have an adequate and reliable number of aircraft to allow for mass paratrooper landings at distance.

P.S. C-47 licensed in the Soviet Union as the Li-2. Considerable numbers built and used during the war.