Still yet more extracts with commentary from the Internet web site "Great Power War". Topics in all cases aviation . . . oddities and curiosities for want of a better term and description.

"Eye of newt and toe of frog, Wool of bat and tongue of dog, Adder's fork and blind-worm's sting, Lizard's leg and owlet's wing, For a charm of powerful trouble, Like a hell-broth boil and bubble."

"At the outset of the war, the United States Army Air Corps was in the process of developing a number of prototype aircraft, but it would be a few years before models like the very capable P-51 Mustang were ready. Meantime, the Air Corps had to make do with fighters and interceptors that were inferior to German and Japanese planes."

"One such plane under development was the GM/Fisher P-75 Eagle. The Air Corps wanted a plane that was fast and well-armed. The Allison engine company developed a new model called the V-3420, a massive 24-cylinder engine that combined a pair of V-1710 engines into one. The Fisher Body Division of General Motors set to work building an aircraft around the engine." 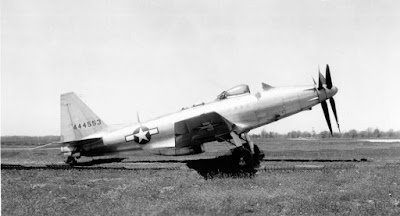 Fisher with two engines combined into one drive shaft, two counter-rotating propellers. Greater speed achieved by the brute force approach. NOT so ideal and elegant from the engineering perspective but it could have worked and offered more than an expedient..

Construction and employment of the warplane too the entire developmental process short-circuited. Fisher to be an amalgam with regard to tail, wings, fuselage, cockpit, etc.

"the idea presented was to build an aircraft out of proven portions of existing airframes with the entire concoction fitted around the Allison V-3420."