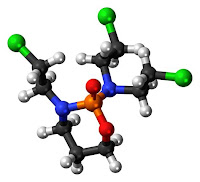 Here with a serendipitous discovery a chemotherapy drug [the first?] as a result of an inadvertent contamination of American personnel with mustard agent, the Second World War, Bari, Italy.

"Also during World War II, an incident during the air raid on Bari, Italy, led to the release of mustard gas that affected several hundred soldiers and civilians. Medical examination of the survivors showed a decreased number of lymphocytes. After World War II was over, the Bari incident and the Yale group's studies eventually converged prompting a search for other similar compounds. Due to its use in previous studies, the nitrogen mustard known as 'HN2' became the first chemotherapy drug mustine."

A decrease in the number of lymphocytes that significance of which is unknown to me other than such cells [lymphocytes] described as "killer cells" part and parcel of the human body immune system.

The Bari Air Raid the last "fling" of the Luftwaffe during WW2. One of those American warships in the harbor of Bari when bombed the release of chemical warfare agent mustard prodigious, contamination widespread and A SECRET AT THE TIME AND FOR YEARS AFTER WARDS.

Before Bari NO chemotherapy drugs existed? After Bari the situation changed dramatically, a new way of treating cancers hitherto undiscovered now made apparent? All a result of WAR!

Read further of the Bari Raid, the unfortunate destruction of the allied merchant vessels in harbor and in particular the release of mustard agent from the SS John Harvey.

Unfortunately this is often how modern science works, that observation that the mustard agent contained a property useful in the treatment of cancers. An entire aspect of medicine unknown prior to Bari stimulating research the results of which most profound.