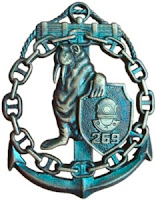 Cavitation and super-cavitation we have not spoken about in a long time. Here with an inspired use of cavitation.

An underwater projectile by velocity and shape able to overcome for a considerable distance the inherent resistance of the water.

"Firearms Of Frogmen – Part I of II"

"Underwater Pistols Used By Combat Divers Around The World"

"the B-VI-307, a simple four-barrelled hinged-break pistol that fired a flechette, or tiny arrow, rocket-assisted 7.62mm round. These rounds stabilized in water byusing a cavitation bubble. This bubble was generated around the front of theflechette by the specially designed shape of the nose."

269th Naval Spetsnaz [Russian] their emblem the walrus. It is reasonable to assume that the 269th works in the polar regions?: Assigned to the Northern or Pacific fleet. The walrus a dangerous animal when provoked even a polar bear keeping a respectful distance from adult walrus.

German anti-shipping glide-bombs of the Second World War [WW2] and the Soviet/Russian atomic warhead rocket-propelled torpedo both making use of cavitation and super-cavitation.

Part II of the article to deal with long "guns" and the use of such for underwater warfare by naval commando units. We keenly await.