That latest and greatest Russian tank the T-14 Armata equipped with a smooth-bore 125 mm gun. Capable of firing a SABOT, HEAT, fragmentation and ATGM round.

The ATGM [anti-tank-guided-missile] also having a capacity to engage at long range a low-flying and hovering helicopter.

NO SUCH BIG-BORE WEAPON OF THAT DIAMETER USED IN AN ALL-PURPOSE/MULTI-ROLE ARMORED VEHICLE SINCE THE TIME OF WORLD WAR TWO [WW2].

"ISU-152 was a Soviet multirole fully enclosed and armored assault gun or armored self-propelled gun, also capable of serving as a heavy tank destroyer developed and used during World War II, with a subsequent use, mainly in the Soviet military, until the 1970s." 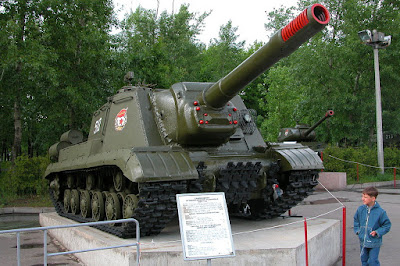 A monster of a combat vehicle. That child as included next to the exhibit giving us some sense of the scale.

ISU-152 basically a howitzer mounted in an armored and tracked chassis. NOT possessing a turret and NOT a tank as the word tank commonly, ordinarily and generally understood. There existing a degree of traverse and elevation for that gun but not excessively so.

The ISU-152 able to satisfy a variety of roles. To include:

That assault gun now a weapons system considered passe' and having been so for some time now.

See here and here some outstanding You Tube videos regarding the ISU-152.