RAF over the Baltic.

Flash message! From MARCONI through Harry:

"RAF Typhoons have intercepted and shadowed two Russian military aircraft over the Baltic Sea, it has been disclosed.  The jets were scrambled from Amari Air base in Estonia yesterday after the planes approached Baltic airspace without sharing a flight plan.  They initially identified and shadowed an Il-20M 'Coot' A surveillance aircraft, before checking out an An-26 'Curl' transport plane flying north from Kaliningrad."

"Four Typhoons were deployed to Amari on May 1, and are working with Norwegian aircraft to patrol Latvia, Estonia and Lithuania . . . [this is] the Baltic Air Policing detachment"

ARTICLE 5 OF THE NATO CHARTER. RUSSIAN MACHINATIONS IN THE BALTIC STATES THWARTED SO FAR. NO ACTION BY RUSSIAN AGAINST THE BALTIC NATIONS OR YOU INCUR THE WRATH OF NATO!! YOU HAVE BEEN WARNED! 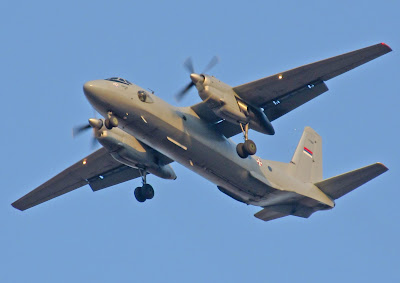 An An-26. Very nice looking aircraft. NATO code name "Curl".
Those versions of the An-26 most applicable to the intelligence and reconnaissance mission to include:
* An-26RR
Alternative unit designation of the 'An-26RT' ELINT (ELectronic INTelligence) aircraft.

* An-26RT
"Curl-B": (First use of the designation) A basic designation for a series of ELINT aircraft fitted with a wide range of electro-magnetic surveillance equipment.