Here from the General George Patton Museum in Ft. Knox KY. we have this online exhibit of a Christie tank.

"1933.22.00
This is a handmade, sheet metal model of a Christie “Fast Tank”, dating to the early 1930s. Over 30 inches long, the model has independently sprung road wheels on each side with a non-rotating turret. The maker is unknown."

That Christie tank most famous for the independent suspension, revolutionizing tank design.

Tanks as built prior to the tank possessing the Christie suspension unreliable in the extreme.

Unreliable contraptions that worth on the battlefield open to question.

Those "independently sprung road wheels" of the Christie tank allowing for fast movement and much more reliable. The tank as a battlefield weapons system now having a potency that prior was not the case. That combination of protection [armor], firepower [gun] and mobility [movement] that latter most item now RELIABLE and much less so susceptible to breakdown.

AND as previously discernible by myself, the Christie tank as shown in this online exhibit having SLOPING ARMOR.

CHRISTIE WAS FAR AHEAD OF HIS TIME AND NOT ONLY WITH REGARD TO THE SUSPENSION!!

In some quarters the Soviet T-34 tank credited with being the "first" to incorporate sloping armor into the design. The French prior to the T-34 also having a pair of tanks also possessing sloping armor. 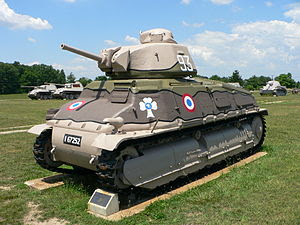 This is a French SOMUA 35 from that era prior to World War Two. At least by 1935 [that 35 signifies 1935] having sloping armor. Bears a remarkable resemblance to the Sherman tank or does the Sherman bear a remarkable resemblance to the SOMUA? That cupola on top of the turret also reminds me of the cupola as found on the American armor M48/M60 series of tanks.

Allow that online exhibit time to load and you can rotate the image to view the Christie tank from all angles and see the sloping armor that entire tank so as designed!!