From the book review by Professor Al Nofi  "Burning Rails as We Pleased" that title MOST evocative of a pervasive and peculiar practice from the American Civil War, the destruction of southern railways, entire sections of track ripped up, the rails bent and twisted into forms and shapes rendering them unusable. This "phenomenon" referred to by a variety of names given the circumstances and context.

"Sherman's neckties were a phenomenon of the American Civil War. Named after Maj. Gen. William Tecumseh Sherman of the Union Army, Sherman's neckties were railway rails destroyed by heating them until they were malleable and twisting them into loops resembling neckties, often around trees. Since the Confederacy had limited supplies of iron, and few foundries to roll the rails, this destruction was very difficult to repair. They were also called Sherman's bow ties, Sherman's hairpins or Jeff Davis hairpins."

That explicit order of Sherman referring to the destruction of a section of railroad track and the bending of the rails:

"... twisting the bars when hot. Officers should be instructed that bars simply bent may be used again, but if when red hot they are twisted out of line they cannot be used again. Pile the ties into shape for a bonfire, put the rails across and when red hot in the middle, let a man at each end twist the bar so that its surface becomes spiral." 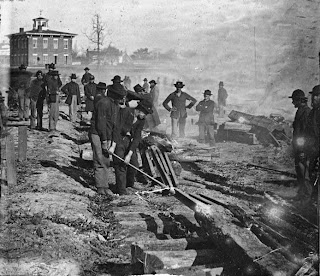 Yankees hard at work destroying a section of Confederate railroad track. That army of Sherman was said to be most workmanlike. As a blue collar worker in a factory, rise early in the day, break camp, march on the objective for the day, complete the mission, make camp. A daily routine an integral part of that "March to the Sea" the destruction of southern industrial and transportation capability. 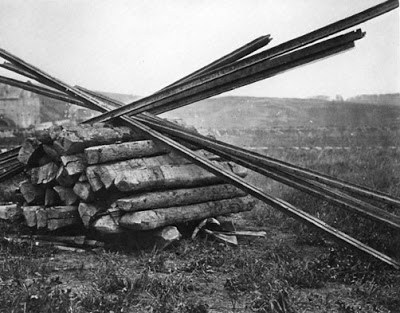 A torn up section of track ready to be set afire. Railroad ties in a pile with another pile of rail on top. Those ties ignited and  heating the rail until the iron turns a cherry red color. The rail then malleable to be bent and twisted into a form making it unsuitable for further use!

This military sketch art shows the rails being dragged to a location where they are to be bent and twisted. Malleable after being heated, the soldiers functioning much as would a workman in a foundry, again, that army of Sherman described as "workmanlike" many of the troops probably having at some point worked in a factory! 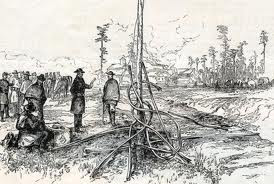 Neckties! Here in the aftermath of the destruction showing the preferred method of destroying the rail, wrapped around a tree, bent and twisted as to make further use not possible, efforts to straighten futile. Please note closely that several of the rails seem to have formed the letters U & S. United States!

"The legend of Sherman's Neckties would grow after the army had left. One story of particular interest concerns the shape of the 'neckties' left by the invaders. As the Union soldiers became more skilled at heating and bending the rails, they would create a U and an S and leave them in a prominent position."

There was also a certain amount of malicious delight derived from this "phenomenon" A gleeful enjoyment of the destructive nature of man that is latent in all of us? Giving themselves to abandon and able to do on command what is ordinarily in civilian life a grave criminal offense is pleasurable? I am not sure but this might well be the case.