Thanks to several sources, here is info on a weird type of Soviet heavy tank from the 1950's.

ONLY seen in the experimental prototype stages. Called a T-10 but NOT that. This particular experimental heavy tank went by several designations, depending upon what design bureau [that is what the Soviets called them] was instrumental in the initial development.

Heavy tanks DESIGNED WITH THE SPECIFIC INTENT TO OPERATE AND SURVIVE ON THE NUCLEAR BATTLEFIELD, IMPERVIOUS TO NEARBY ATOMIC DETONATIONS!!

"the Troyanov Obiekt 219 heavy tank prototype, which ranks as the best Russian vehicle of its type (along with the Isakov Obiekt 770). It was designed to fight in the nuclear battlefield . . . The hull shape of the 279 was dictated by the need to resist overturning by the blast shockwave and resultant high speed winds . . . A high powered 1.000hp naval diesel engine and a 130mm gun were employed for mobility and firepower." 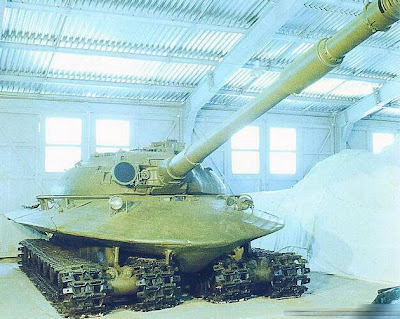 A tank - - possessing the shape of a turret on top of an armored clam shell with four tracks for mobility. Having an enormous gun with long barrel and large caliber [130 mm]!! 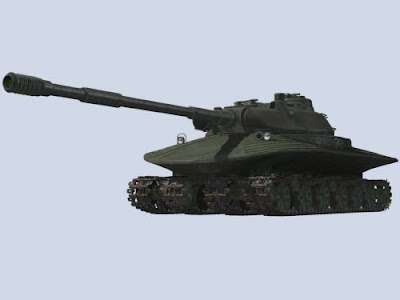 A tank existing ONLY in the form of prototypes - - the entire concept of "heavy" tanks becoming passe' with developing technology. Cost I am sure too becoming a factor. Mass production of such armored vehicles was too expensive!

Tanks at one time existed in all manner of shapes and forms - - "flavors". Heavy tanks, medium tanks, light tanks, fast tanks, amphibious tanks, etc.! This is not the case, has not been for some time, and probably will never be again!!

More than anything else too, the Soviet experience with heavy tanks, the Joseph Stalin [JS] brand and the T-10, were more or less negative. Very powerful gun, thick armor, but not having the desired mobility and being mechanically unreliable. NOT favored by the troops for the most part compared to say the much more agile and reliable T-34 from World War Two fame.

The Object 279 existed only as a gleam in the eye, but ONLY that.