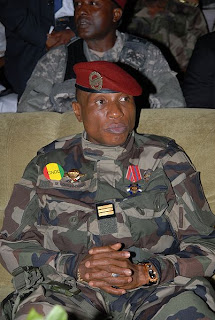 Here with more on the situation in Guinea. With emphasis on the dictator, Moussa Dadis Camara.

Moussa, a man of modest rank in the Guinean military, a Captain, seizing power only six hours subsequent to the announcement "following the death of long-time President Lansana Conté". Moussa and his boys having made ready, poised, prepared, etc.

"Captain Moussa Dadis Camara (born 1964) is an officer of the Guinean army who is currently serving as the President of the Republic of Guinea’s National Council for Democracy and Development . . . , which seized power in a military coup d'état on 23 December 2008 following the death of long-time President Lansana Conté."

"He studied law and economics at Abdel Nasser University in the capital, Conakry. He is a Christian in a country that is at least 85% Muslim. Dadis speaks five languages: French, Kpelle, Susu, Maninka and German"

"Camara is a smart guy, with a university education. He speaks five languages and is very knowledgeable about economic and mathematics."

In a nation that 85 % Muslim, a Christian becoming the ruler is a rarity? Moussa does have some inherent smarts, is educated, but is also amoral at the same time?

Furthermore - - read this article from the StrategyPage web site:

"October 31, 2009: Guinea is checking out the black market for weapons. That's because the country is in turmoil after a new dictator recently took over, when the long time incumbent died a year ago."

The dictator always needs new weapons! Always! So many threats. So many enemies. Etc.

This "National Council for Democracy and Development" is merely a transitional governmental apparatus, the goal being a return to democracy?

NO! Guinea ever since independence in 1958 HAS NEVER BEEN A DEMOCRACY AS THAT TERM IS GENERALLY, ORDINARILY AND COMMONLY UNDERSTOOD. For A period of twenty-six years beginning in 1958 was under the authoritarian one-party, one-man rule of Ahmed Toure', a self-proclaimed Marxist and socialist. Then after the death of Toure', twenty-four more years of one-party, one-man dictatorial rule by another despot.

Pity the plight of the poor African. A continent with extensive riches, almost none of the wealth ever being distributed in a fair and equitable manner!!

A situation for which the military man "gone bad" is to blame in large measure!