Once more, from the Wired.com web site - - "Danger Room":

"You’d think men and women who handle heavy weapons, fly the planet’s most advanced airplanes, and take care of multi-million dollar equipment could be trusted to go outside at night without wearing a day-glo safety belt. The United States Air Force would beg to differ."

"Instead, airmen are ordered to wear the reflective accessories from the late afternoon on. That goes for domestic installations, and for war zone bases, too" 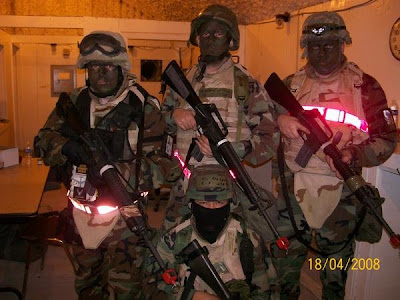 We have to get this straight now. American airmen - - FOR REASONS OF SAFETY - - must wear the reflective day-glo belts during hours of darkness - - while on the flight line - - no matter what their assignment or duty? This is not actually specified in the article, but that is my intuitive reaction!

Or must airmen wear the reflective belts - - ANYWHERE when on the airbase, during hours of darkness!? A requirement not only just for the flight line, but ANYWHERE on the base period?

This requirement - - this order - - IS NOT SO SILLY, STUPID, AND ABSURD AS IT MAY SOUND OR APPEAR?

The flight line of a military airfield is AN INHERENTLY DANGEROUS PLACE. An excess degree of concern with safety is mandated by a real-honest-to-GOD-dangerous situation that exists! NOT only from aircraft taxi-ing to and fro, but also from the myriad numbers of vehicles that service those aircraft moving back and forth in a helter-skelter manner - - SIMULTANEOUSLY - - on that same flight line .

EVEN IN A WAR-ZONE - - ON AN AIRBASE - - YOU WILL PROBABLY HAVE MORE DEATHS AND CASUALTIES [WOUNDING] FROM PERSONNEL GETTING RUN OVER OR HIT BY A VEHICLE THAN YOU WILL POTENTIALLY HAVE FROM ENEMY ACTION!!

Those airmen in the photo accompanying this blog entry are members of the USAF Security Force? Guard vital USAF installations, aircraft, munitions [atomic], during a time of peace and war - - AND - - especially when our nation is at war, must be ready to function as conventional infantry, repel enemy ground attack against an USAF airbase! [please note that flap of the SAPI vest that extends over the crotch. Protects the vital groin area while not impedinging or restricting normal movement.]