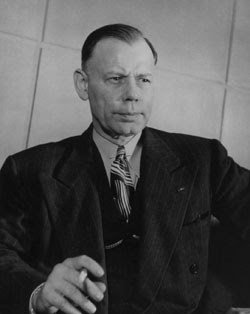 To use the words military and intelligence in the same sentence is a form of oxymoron? So it is often stated!

"ox·y·mo·ron - - A rhetorical figure in which incongruous or contradictory terms are combined, as in a deafening silence and a mournful optimist."

Here are two anecdotal accounts, instances of military men, displaying an intelligence, innate and developed both - - of the highest order.

Persons, military men both, able to "regurgitate" more or less instantaneously, entire paragraphs, portions, citations of memorandum or papers, doing so with accuracy, an ability exercised almost casually, at will, in a manner that even the astute find amazing!!

"Bedell-Smith was a different. matter. He had a cold, fishy eye and precision-tool brain. At my first meeting with him, I had take a document of twenty-odd paragraphs on Anglo-American war plans. For his scrutiny and comment. He had flipped over the pages casually and tossed it aside, then engaged me in close discussion of the subjects involved, referring from memory to the numbered paragraphs. I kept pace only because I had spent a whole morning learning the document by heart. Bedell-Smith, I had an uneasy feeling, would be apt to think that two and two made four rather than five." - - Kim Philby.

"Ike . . . fascinated me by his almost computer-like memory. He seemed never to forget a fact or a face. I would take him a report on some subject, which he would read with incredible rapidity, and then he might say, 'I read something recently which ties up with that. Let me see, it is in a file on . . . about page 57, second paragraph from the bottom . . .' . . . sure enough, he would be right." - - "The Enemy Is Listening" - - Aileen Clayton.

* Kim Philby is of course the renegade British Secret Service officer that betrayed to the Soviets for over a period of decades any and all secrets he came in contact with.

* Aileen Clayton served during WW2 as an officer in the British Y Service. Radio interceptor operators who specialized in radio reconnaissance directed against the German Luftwaffe.

This ability to "regurgitate" IS a sign of a keen intellect that has been developed and honed over a period of time? Photographic memory [that is what this is?] and an astounding faculty for recall is an indication of superior mind power?